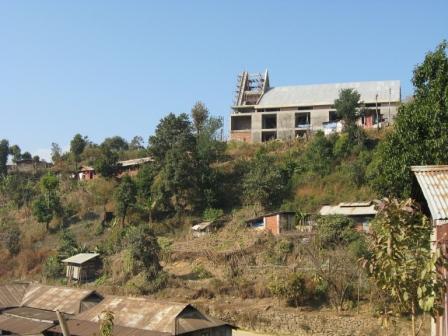 Politically, Nagaland is part of India, but ethnically, geographically, linguistically, and emotionally, N orth East India has an identity all of its own. There are some 20 Naga tribes, each with their own geographical territory, traditional dances and dress, and mutually incomprehensible languages – tonal Sino-Tibetan dialects, some spoken only by a few thousand people. Closer geographically to Tibet, China, and Burma than to “mainland” India, the mountainous landscape the Nagas inhabit is breathtaking – luscious jungle vegetation, banana palms, teak forests, pineapple plantations, terraced farming – with the Naga villages traditionally perched atop mountain ridges at altitudes of up to 2,500 m, accessible only by jeep travelling 30 km/h and less via pothole-pitted tracks.

Christianity is a major feature of Naga unity and identity – 90% of Nagas are Christians, 75% of them Baptists. The English-speaking Nagaland Baptist Church Council, based in the capital Kohima, co-ordinates church work at a state level, and each tribal and/or linguistic group has its own church administration. Zeme Baptist Church Council (ZBCC), based in Peren Town, is one of these. The Zeme are actually the southernmost of the Naga tribes, inhabiting an area that is divided between the three Indian states Nagaland, Assam, and Manipur – one factor among many which has led to their being particularly disadvantaged (“The least among the tribes”). ZBCC covers two of these states, with 7 churches in Manipur, the rest in Nagaland. 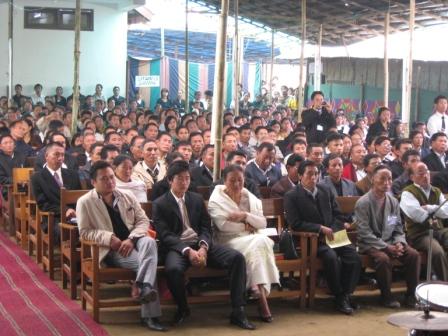 Political unrest and geographical isolation led to Nagaland being effectively cut off from outside contacts until the late 1990s when the Baptist Church was instrumental in negotiating a cease-fire between the rebel Naga underground army and the Indian Army. Foreign visitors are still extremely rare, but cross-cultural contacts are now being eagerly sought and there is an excited mood of change throughout the churches.

Our Zeme partners talk of being “a backward people who are moving forward”. Recognising that “Education is the key” to moving forward, ZBCC has initiated an education drive to equip all its 62 parishes (and one fellowship) with well-trained clergy (at present very few of the churches have academic graduate pastors).
The theological stipend / grant scheme, to which we donate annually, is immensely important in helping achieve this goal. The grant funds help finance students’ studies at a number of colleges afffiliated to Serampore University in the Hooghly District of West Bengal. One of the most prominent of these is Eastern Theological College in Jorhat, Assam, one of the top two theological faculties in the whole of India, with an inspiring range of courses, including a Tribal Studies Department specialising in “constructing a relevant theology for the indigenous people of North East India”.

Peren itself is a hill town of 15,000 inhabitants. The local Zeme Baptist Church there has 750 active (and more than 1,000 associate) church members, a Youth Fellowship numbering 500, a Sunday School of 545 scholars, and a regular worshipping Sunday congregation of 200-500. ZBC Peren is currently erecting a new church building which will offer more accommodation, and they hope to complete work by the end of 2010. Pastor Haiku Nza and his wife Nino (both M.Th. graduates of Seoul University) and Youth Director Rangro Herie are all keen to establish a direct parish link with the ECC. … Let us work towards making that dream a reality!